STORIES OF WOMEN UNDER THE SlovakAid BRAND: Anna Hruboňová - SlovakAid

STORIES OF WOMEN UNDER THE SlovakAid BRAND: Anna Hruboňová

STORIES OF WOMEN UNDER THE SlovakAid BRAND: Anna Hruboňová 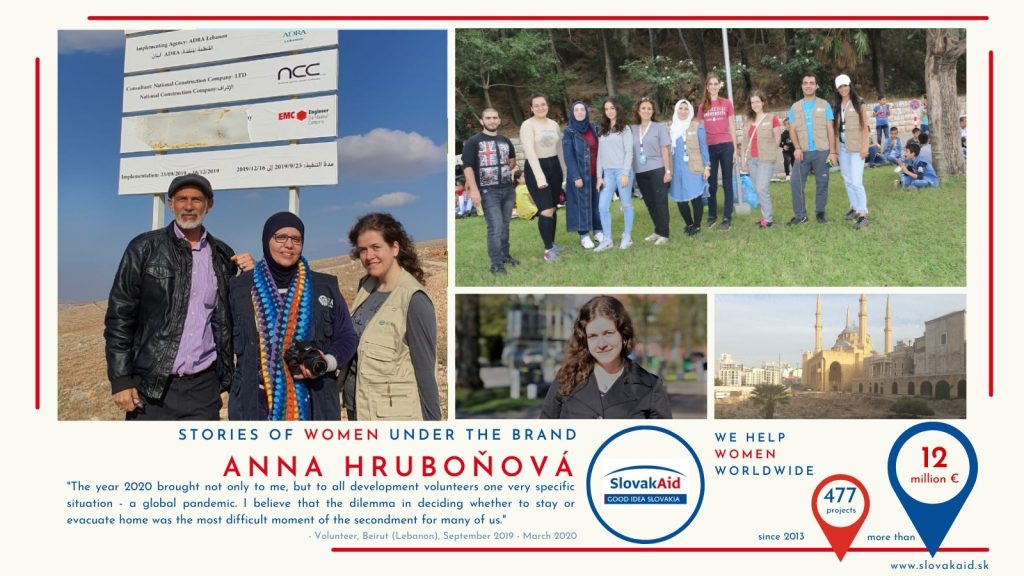 The choice fell on Lebanon due to a combination of several circumstances. I cannot say that I have dreamed of volunteering in this country. After graduating from university, I wanted to try working in the humanitarian and development sector, which I had been drawn to for a long time. I have found that it is not easy at all as a newcomer in this field. The most viable way seemed to be volunteering in low-income countries. Somehow I clicked on the SAMRS program of seconding volunteers and after publishing the results of the call in 2019, I purposefully searched for Slovak organizations, which were approved for grants for volunteers. The best choice I found was from ADRA Slovakia organization, whose website and social media gave the impression of professional management of development volunteering. Currently, ADRA had five secondment offers, I was basically open to anything, but I was most interested in the project in the field of education of Syrian refugees in Lebanon. I dealt with the Middle East region and the issue of refugees already during my studies, so the secondment was an opportunity to experience in reality what I had only read in books until then. And so I found myself in Beirut.

What was the most difficult part of the volunteer's job?

As in any other work - the beginnings. Find your place in the organization, in the community, orient yourself in a new environment and start feeling comfortable and confident. Initially, the challenge was to assess in which activities my involvement can add value and where my presence of local staff is more burdensome. My Arabic is at a very basic level, which has limited me in many ways. Over time, however, we found an intersection between my capabilities and the needs of the host organization, and I think the collaboration was mutually enriching after the initial confusing weeks. However, the year 2020 brought not only me, but all development volunteers one very specific situation - a global pandemic. I believe that the dilemma in deciding whether to stay or evacuate home was the most difficult moment of sending for many of us.

Have you experienced moments in your work when you said you had just touched your personal and professional boundaries?

I went to Lebanon as a recent university graduate, so I had no idea where my professional boundaries were. It was my first experience in project planning and implementation, my coordinators in the host organization ADRA Lebanon took this into account and did not give me tasks that would be beyond my power.

On a personal level, I don't think I would hit the bottom of my strength, but there were times when I felt very tired, whether mentally or physically. As I mentioned, the initial stress from a number of new stimuli was really exhausting. Within a few weeks, one has to orientate oneself in a new country, where things work completely differently, find an apartment, learn a new job, gain the trust of colleagues and the local community, make new friendships ... Another stress test was the revolution that Lebanon erupted in the fall of 2019 shortly after my arrival. The country was completely paralyzed for several weeks by mass protests and roadblocks. Even then, my life went into a "quarantine" regime, and for security reasons, I mostly moved on one street between my apartment, the ADRA office, and the nearest supermarket. Until the end of my stay, violent protests alternated with quieter days. Lebanon changed a lot during that period, and there was a frustration with which I became infected here and there.

The last point was the already mentioned pandemic. Following the recommendation of the embassy, ​​I decided to return home at a time when countries were closing their borders and flights were disrupted en masse. I was on my feet for two days non-stop, my flight was canceled three times and I had to look for creative ways to return to Slovakia. Eventually I managed to get to Vienna via four different airports, I crossed the Austrian-Slovak border on foot at night, as international transport connections were canceled. During so many transfers, of course, they lost all my luggage and I returned home empty-handed, on my own two feet. I was thinking about the parallel that I went to Lebanon to help refugees, and I myself became such a refugee. In the last hours, I was driven only by adrenaline, and that night I really touched the limits of my strength. Today it is already smiling, but then a year ago the world really "collapsed" and many people went through a similarly absurd situation.

Over time, however, I evaluate all these experiences positively. They left me with unique life experiences, strengthened my resilience to stress and the ability to handle crisis situations.

Are you afraid of exotic diseases?

If I went to a country where there is a possibility of infection with a serious disease, I would certainly have respect and follow all preventive measures. In Lebanon, however, I was not in danger of such a thing, the diseases are the same as here in Europe. The only thing to watch out for is a source of drinking water. Consumption of tap water in households would certainly lead to health inconveniences.

How did you manage to adapt to life in Lebanon?

Lebanon has a very heterogeneous society, from rich and influential families to those living in extreme poverty. Today, poverty is no longer just about Syrian refugees who have found security here, but is also affecting Lebanese more and more because of the ongoing economic crisis. Adapting to local life means something different in each region, in each community. The center of Beirut had (before the explosion in August 2020) a luxurious Parisian smirk, while the suburb where I lived and worked was visibly low-income. My daily reality was a certain discomfort associated with the dirt of the environment or the language barrier in shopping and neighborhood relations, as the people in the neighborhood did not speak English and mostly French. But one gets used to it, finds ways.

One aspect that I have not been able to adapt to is local transport. There is no regular public transport system in Lebanon. People move by shared taxis and smaller buses, which are used rather instinctively. You need to wave to a passerby, explain where you want to go and the driver will either take you or not. Ignorance of Arabic again complicates this process and makes every single journey adventurous and stressful at the same time.

What did your normal working day in Lebanon look like?

Most days, my office was the ADRA Lebanon office in Beirut. Working hours started at about 9:00 in the morning and ended at 17:00. I assisted local employees in various project and administrative activities, from the preparation of project applications and reports, through the creation of newsletters and posts on social media to the sorting of financial documents. About once a week I had the opportunity to leave the office bubble and go with our beneficiaries - Syrian children to the park, where we organized team competitions, sports or art activities. Several times during my stay, my colleagues also took me to survey needs and monitor activities in the east of the country in the mountainous Bekaa Valley, where I once again experienced a completely different face of Lebanon than in the west in larger cities.

Have you met at work or leisure in Lebanon as a woman with discrimination?

I have not encountered discrimination against me, neither at work nor in my free time. I don't even remember the sexist remarks from my surroundings, which I often find in Slovakia, for example. In general, Lebanese women seemed emancipated and independent to me. Again, however, it very much depends on the society in which a person moves and what his social status is, not everyone was born under a lucky star. Among our beneficiaries - the most economically vulnerable Syrian refugees, I repeatedly encountered situations where the education of girls was considered unnecessary, literacy was significantly higher for men than for women, women had no decision-making powers in the family and the like. However, this is far from the case for all Syrian families, and it is no longer possible to generalize the entire Middle East region or a specific religious group in this way. Even in Slovakia, we are still learning to fight gender stereotypes, in some families it is doing better, in others there is no will.

I also witnessed a turning point in the issue of discrimination against women - as part of the Lebanese revolution in the autumn of 2019, a feminist movement was formed, which organized marches to draw attention to the sexual harassment and unequal position of women in society. Women became an important part of the demonstrations - a dividing line between protesting men and members of the police and army. As a result, several protests remained peaceful and women were appropriately proud of their role in the revolutionary movement.

Personally, I have been exposed to increased, unwanted male attention in Lebanon, but this is happening to me wherever I come as a free, independent woman, including in European countries. In Beirut, I have never felt downright harassed or threatened.

Would you recommend volunteer work to young people?

Yes, and not just young people! To all whose hearts are moving in this direction. It is not very common in Slovakia yet, but in the world the phenomenon of volunteering is spreading even among middle-aged or older people, who can pass on more know-how to local communities than young, inexperienced people.

It's a good idea to let it rest in your head for a while and make sure it's not a short-term whim. But if this idea has confused you like me for a long time and you are willing to put 100% into it, then I definitely recommend it. Whatever the outcome, your volunteering is guaranteed to be a great school for life and a bottomless source of inspiring experiences.